Sika has continued its growth trajectory with a successful start to the 2019 business year, reporting a new sales record of CHF 1,644.8 million in the first quarter. This equates to an increase of 7.1% in local currencies. A negative currency effect (-1.3%) led to robust sales growth in Swiss francs of 5.8%.

"In a commercially challenging environment we have delivered sales growth of 7.1%, which represents a strong start to the new business year. The acquisition of Parex, which is expected to complete in the second quarter, will provide us with a first-class growth platform. Our organization is set up for the next level of growth, and we anticipate sales to exceed CHF 8 billion for the first time in 2019 as a whole." Paul Schuler, CEO of Sika

Growth in all regions

In the first quarter of 2019, sales in the EMEA region (Europe, Middle East, Africa) increased by 8.2% (previous year: 10.2%). Business developed well in Germany, Austria, and Switzerland (DACH area). The countries of Eastern Europe and Africa posted double-digit growth rates. In Africa, the new national subsidiaries in particular significantly contributed to the strong growth.

At the start of 2019, Sika announced the acquisition of Belineco, a polyurethane foam systems manufacturer based in Belarus. The takeover will further improve access to the East European market. In addition, Sika has invested in a mortar production factility in Senegal.

The Americas region recorded growth of 4.8% (previous year: 12.2%). Numerous major construction projects have been delayed in the United States due to the ongoing shortage of skilled labor. In Mexico, the change in government has led to noticeable cost-cutting measures in the area of infrastructure. Business development in Brazil and Colombia was higher than average. In Canada, the acquisition of the King Packaged Materials Company in the reporting period brought a leading manufacturer of concrete repair systems into the Group.

Sales in the Asia/Pacific region rose by 2.8% (previous year: 3.9%). Double-digit growth rates were reported in two of the largest economies of Asia, namely China and India. By contrast, growth in the countries of Southeast Asia and the Pacific area was uneven, and in some cases even negative.

The Global Business segment recorded growth of 13.3% (previous year: 20.9%), 11.3% being attributed to acquisitions. In the Automotive area, Sika was further able to increase its market share in the first quarter and grow organically, despite the decline in car production figures worldwide. In particular, Sika is benefiting from the megatrends evident in modern automotive construction, which are dominated by electromobility and lightweight construction. New platforms and multi-material designs are opening up new avenues of growth potential for Sika.

Sika expects sales to increase by 6–8% in 2019, in accordance with the Group’s Strategic Targets 2020, and anticipates an over-proportional rise in profits. With the consolidation of Parex tentatively taking place in the second quarter, sales is set to exceed CHF 8 billion for the first time. The implementation of the Group's growth strategy will continue in 2019 with the opening of between seven and nine new factories, and the establishment of further growth platforms in the form of acquisitions. Details of the new Strategy 2023 will be presented at the Sika Capital Markets Day on October 3, 2019.

Net Sales in the first three months of 2019 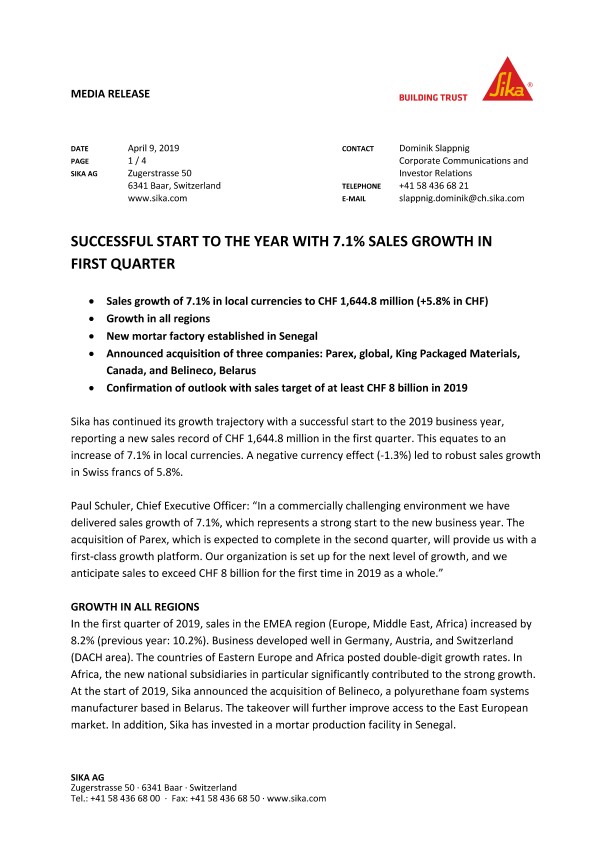